Since 2014, Congress has protected patients and cannabis programs from federal marijuana prosecutions in states that allow it for medical use.

Medical marijuana’s unique legal status involves a little-known provision called the Rohrabacher-Farr amendment that Congress renews every year in spending laws. It says the Justice Department cannot use federal funds to prevent states from implementing their own medical marijuana laws.

Yet marijuana’s continued status as a Schedule I substance — the most severe drug category — remains fodder for those opposed to legalizing medical marijuana in other parts of the country.

Polling shows voters broadly support allowing patients to use marijuana to treat conditions like cancer, post-traumatic stress disorder and HIV, even in states that trend conservative on other issues.

In states considering the issue this year, including Alabama and Tennessee, opponents continue to cite the drug’s Schedule I status.

[Momentum on marijuana moves to statehouses]

In Tennessee, House Speaker Cameron Sexton, a Republican, said in January that he won’t take up medical marijuana because “it’s against federal law.”

A commission created by the Alabama Legislature to advise lawmakers on cannabis policy last year recommended that the state adopt a medical marijuana plan this session, and it published draft legislation to do so.

But opponents on the commission said the top reason for their objections was “the fact that marijuana remains a Class I Controlled Substance under state and federal law.”

Alabama Attorney General Steve Marshall inflamed debate further in January when he wrote a letter in opposition to legislators.

“State laws that allow any use of marijuana, medical or recreational, are in direct conflict with duly enacted and clearly constitutional law,” Marshall wrote. “Thus, state marijuana statutes enacted in violation of the law are damaging to the law itself.”

Alabama state Sen. Tim Melson, a Republican who chaired the cannabis commission, was not pleased by the letter.

“I wish he had reached out to other [attorneys general] that have medical cannabis and see how they deal with it before he came out with a blanket statement, but that didn’t happen,” Melson told the Montgomery Advertiser.

“We’re not reinventing the wheel here,” he said in another interview.

When asked how Marshall’s conclusions fit with the specific federal protections, the attorney general’s spokesman issued a one sentence response: “Marijuana, indisputably, remains a Schedule I controlled substance under federal law.” 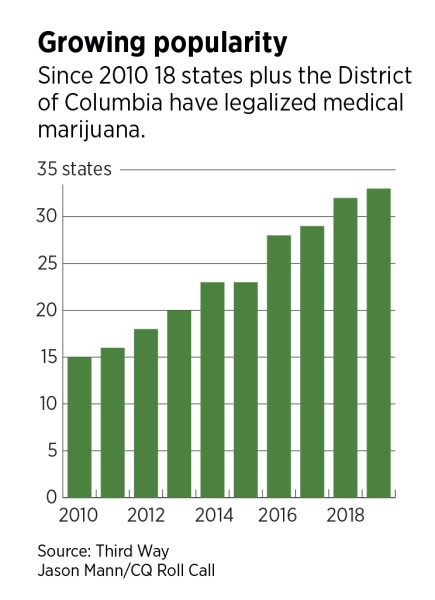 Such arguments underscore why Congress is considering a number of bills to deschedule marijuana entirely or reschedule it in order to better study it. They face long odds in the Senate, which has yet to move on a House-passed bill that is limited to offering protections for banks that do business with marijuana companies.

But advocates for legalization say federal prohibition is a red herring, and that states shouldn’t have to comply with a federal drug law the Drug Enforcement Administration is barred from enforcing.

“States are authorizing conduct that is prohibited under federal law, so at first blush, I can see how this could be confusing and surprising, but at this point, two-thirds of the country have implemented comprehensive medical marijuanalaws,” says Karen O’Keefe, state policy director for the Marijuana Policy Project, a pro-legalization advocacy group that lobbied for the Rohrabacher-Farr amendment.

The rider halted most raids involving medical marijuana in states with legalization.

The patients and providers who cultivate, process and dispense the cannabis these patients rely on in these states for the treatment of debilitating illness do not have to fear federal charges as long as they are in compliance with state law, says Sean Khalepari, regulatory affairs coordinator for the pro-medical marijuana group Americans for Safe Access.

But the unusual nature of the provision is not well understood, some say.

It took more than a decade for Congress to pass the amendment, named for its sponsors, former California Reps. Dana Rohrabacher, a Republican, and Sam Farr, a Democrat. After some Republican lawmakers voiced support, it passed the House narrowly in 2014 and was preserved in a final appropriations deal. President Barack Obama signed it into law.

Rohrabacher-Farr has been incorporated into every Commerce-Justice-Science appropriations law since. In 2018, Reps. Earl Blumenauer, an Oregon Democrat, and David Joyce, an Ohio Republican, added the language to the base text of the bill, making it more durable.

Although the amendment serves as a shield against federal prosecution, “I think it can be misunderstood that this rider does not in and of itself legalize medicinal marijuana at the federal level,” says Jeffrey Vanderslice, who worked as an aide to Rohrabacher in 2014.

Since the Justice Department technically retains the ability to prosecute medical marijuana — even in states that have legalized it, if a business or individual doesn’t comply with state law — advocates are hoping for more certainty on the federal level eventually.

Meanwhile, the Trump administration’s interpretations and actions have contributed to the confusion. In 2018, the administration rescinded guidance by the Obama administration known as the Cole memorandum, which directed Justice to deprioritize prosecuting state-legal marijuana businesses. Trump’s reversal stoked worry and confusion among supporters of legalization.

The office of the attorney general has since turned over from Jeff Sessions, a severe critic of marijuana, to William Barr.

Barr said during a Senate hearing in 2019 that he operates under the Cole memo, but leaves significant discretion to U.S. attorneys in each state. Meanwhile, the White House has sought the repeal of Rohrabacher-Farr in each of its budgets, including in Trump’s fiscal 2021 budget proposal. Congress has always bucked that recommendation. 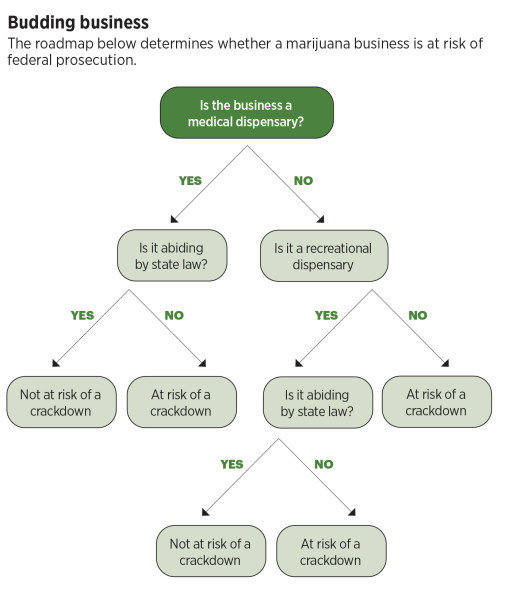 Phil Telfeyan, who litigated the first medical marijuana case to be dismissed due to Rohrabacher-Farr, says a more permanent remedy to the incongruity between state and federal law is needed.

“The real problem right now is inconsistency. There are 94 U.S. attorneys, all appointed by the president, with varying philosophies about medical marijuana,” Telfeyan says. “It’s totally within the discretion of U.S. attorneys in different districts.”

“At the end of the day, we need not just an appropriations rider but a statutory change,” Telfeyan says.

Meanwhile, other states are planning to move forward on medical legalization.

In Kentucky, the Republican-controlled legislature and Democratic Gov. Andy Beshear are working together on a bill this year.

Nemes says passage of a medical marijuana bill in Kentucky is a “foregone conclusion” given that the state Senate President Robert Stivers, who once opposed it, now has said he sees a narrow path forward, and the governor has expressed support.

The annual spending law language means that the federal ban on marijuana is “not that clean anymore,” Nemes says, but “most people aren’t aware of it.”

Still, unless Congress legalizes medical marijuana by statute, the amendment is unlikely to completely dispel worries among state lawmakers and law enforcement.

In January, a Michigan operator of medical marijuana dispensaries was sentenced to 16 years in federal prison. Though marijuana is legal in Michigan, federal prosecutors argued they had the jurisdiction to crack down because he had been out of compliance with state law. But the state had never found him guilty of a crime, his lawyer Nick Bostic says. He was only charged by the state once, according to his attorney, and Michigan dropped the case before the preliminary examination.

“I fully recognize that the landscape has changed in many states in this country,” U.S. District Judge Paul Maloney said. “The fact is, marijuana is a Schedule I controlled substance.”

Telfeyan is critical of the DOJ for pursuing the case.

“They’re often not going after the worst of the worst. They’re going after longer prison sentences,” Telfeyan says. “We expect the Department of Justice to do what is just, but that is often not the primary motivation we see in these cases.”