Good News for Coal: It Can’t Get Much Worse

Bloomberg : “Here’s some good news for a downtrodden U.S. coal industry: next year can’t get much worse after a disastrous 2015.”

“Most utilities that are able to switch to cleaner burning and cheaper natural gas have already done so, resulting in coal losing 10 percent, or 80 million tons, of demand, BB&T Capital Markets said in a report Tuesday.”

“President Barack Obama’s Mercury and Air Toxics Standards, which were implemented this year, spurred a rash of coal-fired power plant closures. Meanwhile, natural gas prices that have dropped 37 percent in the past year made that fuel more attractive than coal for electricity generation. In July, gas eclipsed coal as the primary fuel for power for the second time in U.S. records.” 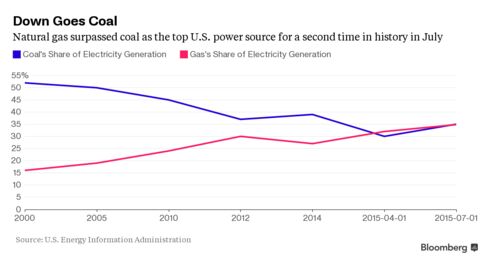 “The best-case scenario for coal in 2016 is that demand is flat or even slightly higher, while the worst case is for it to slip another 2-4 percent, according to Levin.”