Gallup : “Even as most Americans report experiencing abnormal weather conditions lately, more than four in 10 say the seriousness of global warming is generally exaggerated in the news. These sentiments are lower than the record 48% who believed this four years ago, but higher than any year before Barack Obama became president.”

“Public opinion has changed notably since Gallup first asked the question in 1997. Fewer Americans now say the seriousness of global warming is generally correct; at the same time, the percentage finding the threat generally exaggerated has increased, and since 2009 has consistently been at or above 40%, a mark it never reached in the years before.” 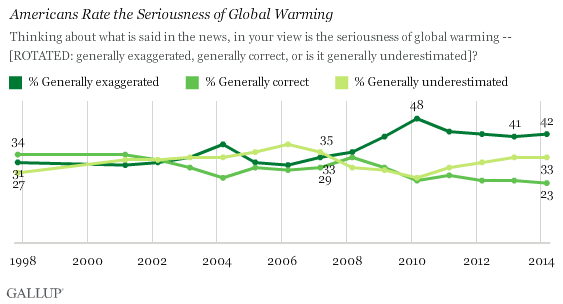