Gallup : “Over the past decade, Americans have clustered into three broad groups on global warming. The largest, currently describing 39% of U.S. adults, are what can be termed “Concerned Believers” — those who attribute global warming to human actions and are worried about it. This is followed by the “Mixed Middle,” at 36%. And one in four Americans — the “Cool Skeptics” — are not worried about global warming much or at all.”

“The ranks of Cool Skeptics have swelled, while the Mixed Middle — once the largest group — has declined modestly.”

“In particular, the percentage of Americans believing that global warming is caused by pollution from human activities dropped sharply in 2010. The same pattern has been seen with personal worry about global warming and the perception that the seriousness of the issue is exaggerated in the news. All of these findings are likely linked to the high profile “Climategate” controversy that emerged in late 2009.”

But: “the percentage of “Concerned Believers” has recovered to pre-Climategate levels.” 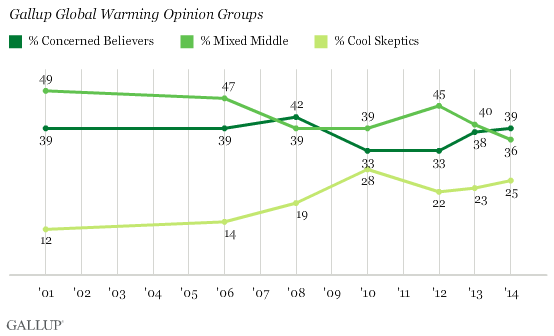